The European defence market is changing. Where once each nation maintained its own defence industry, this is no longer a viable model as Europe faces enormous pressure from the US, which has the worlds largest defence market. In August this year, a new European Directive (2009/81/EC) on defence and security procurement came into force. The new Directive brings defence procurement more into line with mainstream public procurement. Previously member states were able to avoid openly tendering for even quite mundane items of equipment by invoking Article 296 of the European Treaty and stating that they were for their ‘essential security interests.’

Earlier today the Stockholm County Administrative Court ruled that a €240 million armoured personnel carrier deal with the Finnish arms manufacturer, Patria, had breached Swedish public procurement law. The Swedish Defense Materiel Administration (FMV) has been ordered to repeat the tender process despite awarding the contract to Patria in June.

The contract was for 113 armoured modular vehicles and associated equipment to be delivered between 2011 and 2013. Patria is owned by the Finnish Government and the European Aeronautic Defence and Space Company (EADS). 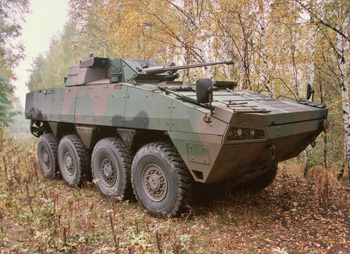 Hägglunds, a Swedish subsidiary of British based BAE Systems, which was also competing for the contract, had filed a complaint before the court in July. The company had given notice to 320 workers at its Örnsköldsvik plant shortly after FMV had announced its decision to award the contract to Patria.

The court found that FMV’s tender process breached the principles of transparency and equal treatment by:

A spokesman for Patria said “Patria regrets the administrative court’s decision, However, Patria is confident of success even in the new tender process as the Patria AMV is considered to be a high quality vehicle proven in international crisis management operations.”

The court’s decision, temporarily at least, overturns Sweden’s award of the contract to a foreign manufacturer , where previously they would have almost certainly awarded the contract to a domestic supplier. But the major change we are seeing is that defence procurement is now required to be open and transparent and that decisions considered to breach these principles can be successfully challenged in court.